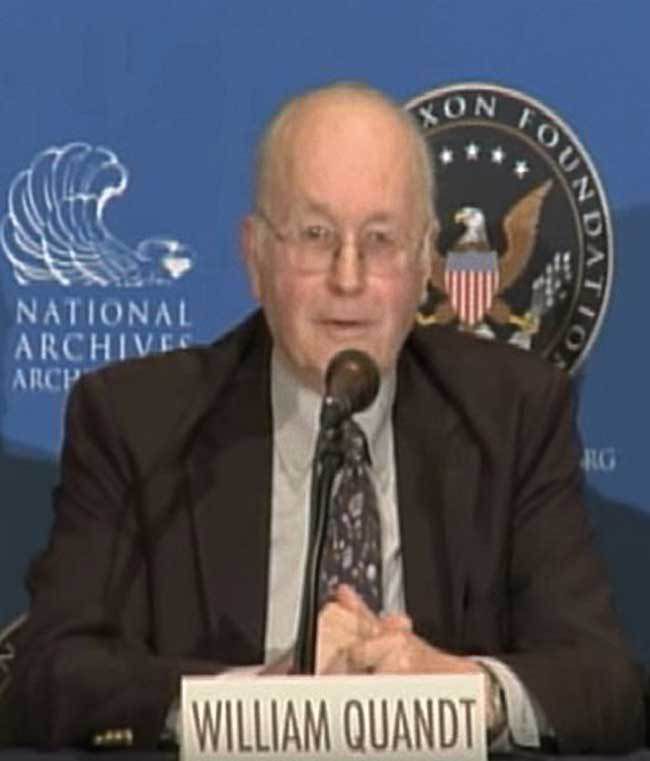 Mohsen Abdelmoumen: Why Dr. Quandt is he interested in Algeria, notably through his two books: Between Ballots and Bullets: Algeria’s Transition from Authoritarianism, and Revolution and Political Leadership: Algeria, 1954-1968?

Dr. William B. Quandt: I was a student in France in 1961, just as the war in Algeria was coming to an end. A few years later I was graduate student at MIT and I was interested in how the newly independent countries would develop. I decided to study Algeria, partly because I was more or less fluent in French, and I was interested in the question of how a revolution can become a state. That led to my first book. The second book was the result of my not having understood the impact of political Islam, so I tried to figure out what happened in the 1990s.

You are one of the few American intellectuals among all those I interviewed, to have analyzed the issue of terrorism in Algeria in the 1990s, via books, newspaper articles, etc. What is the synthesis which you drew from your analysis?

I have been one of the few analysts who continues to think that Algeria has a promising future, despite all the mistakes and problems. The society is intact, despite the 1990s, and there is a new generation ready to take more responsibility. The rentier oil problem is a big issue, as is the succession to Bouteflika, and it will be some time before we see if Algeria can become a model of democratic governance. I read the Algerian press each day, and at least it allows some degree of debate.

Certain anti Algerian French lobbies developed the thesis which one calls “Who kills who”, acquitting the Islamist terrorists by accusing the Algerian army and the intelligence services of having been involved in the massacres. Why this thesis of « who kills who » wasn’t it used in the US?

We may never know the details of what happened in the 1990s. I’m sure there were terrible things done on all sides, but the « qui tue qui » (« who kills who ») thesis puts too much blame on the regime.

I don’t know enough about the issue to have an opinion.

Hillary Clinton is very close to Moroccan Makhzen. In case she would be elected to the presidency, what influence will she have on anti-terror cooperation between the United States and Algeria?

Possibly. The next American president could also be Trump, and who knows what that would mean. But I don’t assume that Hillary is anti-Algeria.

What will be the impact of the election of Hillary Clinton on the issue of Western Sahara? Do you think that she will act in the continuity of Obama or will she change her politics towards this question?

It is not a top priority issue for Americans and I doubt if she has thought much about it.

As intellectual of international reputation and American political responsible, who worked with two American presidents, don’t you think that the option of a NATO intervention in Libya has just been postponed for the American post-elections? Is the political solution wished by Algeria possible according to you?

I get the sense that here is some movement to back the new Libyan government. I don’t know if this what Algerian want, but we all have an interest in seeing the internal crisis in Libya come to an end, and to insure that Daesh doesn’t get a strong foothold there.

Can Algeria of today with a sick president and institutions failed, treat as an equal with other nations, including the United States? A stable Algeria with strong institutions and army it is not a key to the stability of the entire region?

Algeria has to get through its next transition of power. I have no idea how this is going to turn out, but Europe and the US and most of the world want Algeria to have a successful transition to an effective government that can tackle both the internal and external problems that confront it.

The French Government supported the 4th term of the president Bouteflika in spite of his illness, for favourable contracts. Don’t you think that the French lacks of strategic vision by focusing on short-term and enticing contracts, when they are largely responsible for the intervention in Libya and the chaos it engendered? How do you explain this lack of French strategic vision which concerns not only Algeria but all Africa, even Europe and world?

Whatever one thinks of French foreign policy, France remains an important actor in the Maghreb and we should all be trying to encourage it to play a constructive role.

Who is the Dr. William B. Quandt?

Dr Quandt is an American scholar, author, and professor emeritus at University of Virginia, in the Department of Politics, where he holds the Edward R. Stettinius chair and where he teaches courses on the Middle East and American Foreign Policy.. He also served as Vice Provost for International Affairs at the University. He previously served as Senior Fellow in the Foreign Policy Studies Program at the Brookings Institution, where he conducted research on the Middle East, American policy toward the Arab-Israeli conflict, and energy policy. Dr. Quandt served as a staff member on the National Security Council in the Richard Nixon and Jimmy Carter administrations (1972-1974, 1977-1979). He was actively involved in the negotiations that led to the Camp David Accords and the Egypt–Israel Peace Treaty. Dr. Quandt was also an Associate Professor of Political Science at the University of Pennsylvania, worked at the Rand Corporation in the Department of Social Science, and taught at UCLA and MIT. His areas of expertise include Algeria,

Egypt, Israel, Palestine, the Peace Process, and U.S. Foreign Policy. He was President of the Middle East Studies Association. He is a member of the Council on Foreign Relations, and serves on the Board of Trustees of the American University in Cairo and the Foundation for Middle East Peace.

Dr. William Quandt has written numerous books, and his articles have appeared in a wide variety of publications. His books include: Peace Process: American Diplomacy and the Arab-Israeli Conflict Since 1967, (Brookings, 2005, third edition): Between Ballots and Bullets: Algeria’s Transition from Authoritarianism, (Brookings, 1998); The United States and Egypt: An Essay on Policy for the 1990s, (Brookings, 1990);Camp David: Peacemaking and Politics, (Brookings, 1986); Saudi Arabia in the 1980s: Foreign Policy, Security, and Oil, (Brookings, 1981); Decade of Decisions: American Foreign Policy Toward the Arab-Israeli Conflict, 1967-1976 , (University of California Press, 1977); and Revolution and Political Leadership: Algeria, 1954-1968, (MIT Press, 1969). He also edited The Middle East: Ten Years After Camp David, (Brookings, 1988).

In French in Palestine Solidarité: http://www.palestine-solidarite.org/analyses.mohsen_abdelmoumen.200516.htm