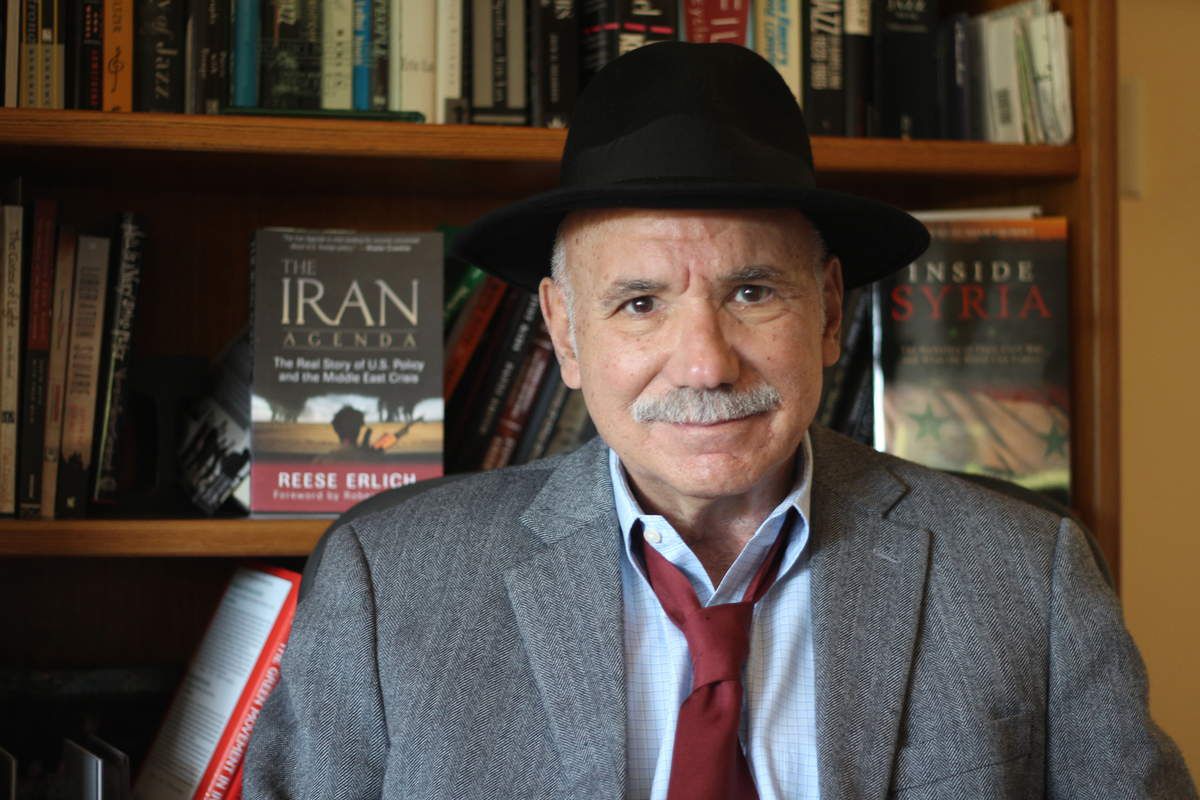 Mohsen Abdelmoumen: What is your analysis of the American withdrawal of the Iranian nuclear agreement?

Reese Erlich: The US has been violating the agreement for some time by pressuring other countries not to do business with Iran. It started under Obama and intensified under Trump. Trump’s decision to reimpose harsh sanctions sends a message around the world that you can’t trust the US, in case you had any trust previously. It is also a step towards military confrontation with Iran as seen by recent Israeli actions. I think the decision will ultimately isolate the US in the Middle East, Europe and Asia. It will make a Korean accord even more difficult.

« The Iran Agenda » is a visionary book where you talked about a possible American strike on Iran. Do you think the Trump administration can go so far to a military confrontation with Iran?

It now seems likely that Trump is heading for a full scale confrontation with Iran. The US will look for any excuse to attack Iran, whether a direct strike against Iran’s nuclear facilities or by attacking Iran’s allies in Iraq or Syria. Secretary of State Mike Pompeo and National Security Advisor John Bolton are infamous hawks. They could falsely claim Iran is developing a Bomb and attack a nuclear site with the intention of sparking regime change. The Iranian people would certainly oppose such an attack and rally around their government as they did during the Iran-Iraq War. Any US effort to overthrow the Iranian government would require massive occupation troops and would certainly be defeated over time. The people of Iran have many legitimate complaints against their government, but they don’t want an outside power imposing a new regime. They already went through that experience when the CIA overthrew the democratic government of Mohammad Mossadegh in 1953 and reinstalled the Shah.

In your opinion, are we not on the eve of a war between Israel and Iran?

We’re already seeing the beginnings with the Israeli bombings in Syria, attacking alleged Iranian military sites. I don’t think we’ll see direct bombing of Tehran and Tel Aviv by opposing forces. But the Israelis could launch even larger attacks in Syria and against Hezbollah in Lebanon. Israel is preparing to attack Lebanon again. Israel could well lose such a war. Remember Hezbollah defeated Israel in 2000, forcing the Israelis to withdraw from southern Lebanon and again in 2006. The Israeli military is not any more able to handle a long war of attrition than the US.

In your book « Conversations with Terrorists« , you mention among other things your talks with Khaled Meshal, the leader of Hamas, and Mohsen Sazegara, the Iranian founder of the Revolutionary Guard Corps, etc. In your opinion, movements like Hezbollah or Hamas are they resistance movements and why do Westerners see these movements as terrorist groups?

Terrorism has replaced communism as the boogeyman of our times. Imperialists must have something to scare people and convince them that it’s OK to spend trillions of dollars on war. The US now claims anyone opposed to US policy that takes up armed struggle is a terrorist. We get bombarded with all kinds of propaganda about these evil terrorists, whether in the NY Times or in Hollywood films.

Hamas and Hezbollah are political parties with armed militias. Last week the Lebanese coalition that includes Hezbollah won a solid majority in the Lebanese parliamentary elections. Hamas won the last parliamentary elections in Palestine. I do not agree with the politics of either group and would not vote for them if I lived in the region. But they are legitimate parties whose political views are part of the Middle East political reality.

Hillary Clinton said publicly that the United States has created Al Qaeda. The Saudis and Qatari, allies of Westerners, armed and financed Daesh and Al Qaeda. In your opinion, why do Westerners continue to have privileged relations with Saudi Arabia and Qatar?

Could it be oil? Saudi Arabia, Qatar and other oil rich kingdoms provide billions of dollars in profits to US oil companies. Some countries also provide Navy and Air Force bases to the US. The US is perfectly happy supporting brutal dictatorships as long as they are pro-US and stable.

By the way – I don’t think the US created Al Qaeda or ISIS. The US and KSA funded and manipulated the anti-Soviet war in Afghanistan. But Al Qaeda emerged some time later. I do believe that US wars of occupation set the conditions for the rise of such terrorist groups. When people rebelled against occupation, various groups emerged in opposition. The US and its allies supported Al Qaeda affiliated groups in Syria, for example, but didn’t create them.

In the short run, the situation will be very bad. Trump will likely escalate various wars. But people in the Middle East and in the US itself will strongly oppose Trump’s policies. There are numerous political parties and armed militias that will fight US occupation. If US soldiers are killed in combat, there will be a strong reaction in the US. Four US soldiers were killed in Niger, and it became front page news for days. We still don’t know why US troops are fighting in that country. Progressives in the US strongly oppose Trump, and I think the Republicans will face serious setbacks in the November elections. That will undercut Trump’s aggression.

You have dealt with the issue of American-Korean relations. What do you think of the summit that will take place between Donald Trump and Kim Jong-un? In your opinion, what will be the impact of the rapprochement of the two Koreas on countries like Japan or the United States?

The North Koreans may be willing to give up some, but not all of their nuclear weapons. In return they will want international aid and a formal peace treaty ending the Korean War. Trump’s top advisors oppose that or any other meaningful deal. Trump is a wild card. He has such a massive ego, he might actually agree to something acceptable to both Koreas. But I think that’s very unlikely.

The NY Times ran an article that the Pentagon was ordered to do a study on reducing US troops in South Korea. That’s a great idea! But the next day the Trump administration denied there is any such study. Welcome to the wonderful world of Trump diplomacy.

If there is rapprochement, the people of South Korea and Japan will benefit because the chance of war is greatly reduced. But I don’t think the rapprochement is likely.

Your book « Target Iraq » co-authored with Norman Solomon has become a bestseller and shows the true face of American war and intervention in Iraq where media propaganda played a big role. Years after this criminal intervention, do you think people are aware of what really happened in Iraq? Do not you think that the destruction of Iraq and the dissolution of the Iraqi army due to the American intervention have been a US strategic mistake, of which the Middle East region continues to suffer the consequences even today?

Most Americans realize the Iraq War was a disaster because over a trillion dollars was wasted, over 4400 US soldiers killed and 32,000 wounded. Hundreds of thousands of Iraqis died. Americans are now very suspicious of false claims from the White House because of the phony information about weapons of mass destruction. But I don’t think most Americans yet realize the full extent of the catastrophe. The Iraq occupation wrecked Iraq, gave rise to ISIS and helped destabilize countries throughout the region. History will see the Iraq occupation as a key turning point in the decline of US imperialism.

You state that the US continues to be in six armed conflicts: Afghanistan, Iraq, Syria, Yemen, Libya, Somalia. Do you think wars are necessary for the survival of the United States?

These wars are disastrous for the civilian population there. And the people of the US would be much better off without these wars as well. The US is fighting most of these wars for geopolitical reasons – to prevent someone coming to power, or to fight Iran. The wars benefit no one except a small number of multinational corporations, war profiteers and hawks in Washington. The US wastes trillions of dollars that could be used for much needed health care, education, rebuilding infrastructure, and other domestic needs.

In the war in Yemen, Saudi Arabia, the strategic ally of the US, uses prohibited weapons that the United States and Westerners sold to it. You spoke in an article about US responsibility in this war. How do you explain the silence of the international community in the face of this barbarism and what is the utility of the United Nations? Are we not in the law of the jungle?

There has been some media coverage of cluster bombs and other prohibited weapons used in Yemen, but far too little. One need only compare that anguished screams over the use of chemical weapons in Syria with the far worse attacks on Yemeni civilians. Those fighting wars of occupation always exaggerate the crimes of their enemies and minimize their own.

Who is Reese Erlich?

Reese Erlich’s history in journalism goes back over 40 years. He worked as a staff writer and research editor for Ramparts, an investigative reporting magazine published in San Francisco. His articles appear in Vice News and Foreign Policy. His television documentaries have aired on PBS stations nationwide. He writes a nationally distributed column « Foreign Correspondent”.

He has also directed many radio documentaries including: “Inside Syria« , 50-minute radio documentary with a first hand report on the Syrian uprising; “Who Won the Egyptian Revolution?”; “Lessons from Hiroshima 60 Years Late”; « Security Check: Confronting Today’s Global Threats » 10-minute segment on drugs and small arms in Colombia; « Reaching for Peace in the Holy Land », etc.

In 2013–2016, Reese Erlich received grants from the Pulitzer Center on Crisis Reporting for his coverage of Syria, Bahrain and Iran. In 2012, The Society of Professional Journalists (Northern Calif.) gave Erlich an award for best radio explanatory journalism for his documentary « Inside the Syrian Revolution. In 2011, Erlich received two grants from the Pulitzer Center on Crisis Reporting to cover the Arab Spring uprisings. In 2010, Erlich and co-author Peter Coyote won an honorable mention from Project Censored for their 2009 article in Vanity Fair Online entitled “Murders at Al-Sukariya. In 2006, he received the Peabody Award, shared with producers of Crossing East, a public radio documentary describing the history of Asians in the U.S. The Clarion Award presented by the Association for Women in Communications for the public radio documentary « Children of War » (2006). A second and third place from the National Headliner Awards in the Best Documentary and War Coverage categories (2004) for « Children of War ». The Project Censored at Sonoma State University, eighth most censored story in America in 2002–03 for article « Hidden Killers » about U.S. use of depleted uranium. The Depth reporting prize for broadcast journalism awarded by the Northern California Chapter of the Society of Professional Journalists (2002) for public radio documentary The Russia Project hosted by Walter Cronkite. The Bronze World Medal in the national/international news category from the New York Festivals (2002) for The Russia Project. The second place in the Chicago International Film Festival investigative reporting category (1996) for Erlich’s TV documentary « Prison Labor/Prison Blues. »

In French in Palestine Solidarité: http://www.palestine-solidarite.org/analyses.mohsen_abdelmoumen.130518.htm