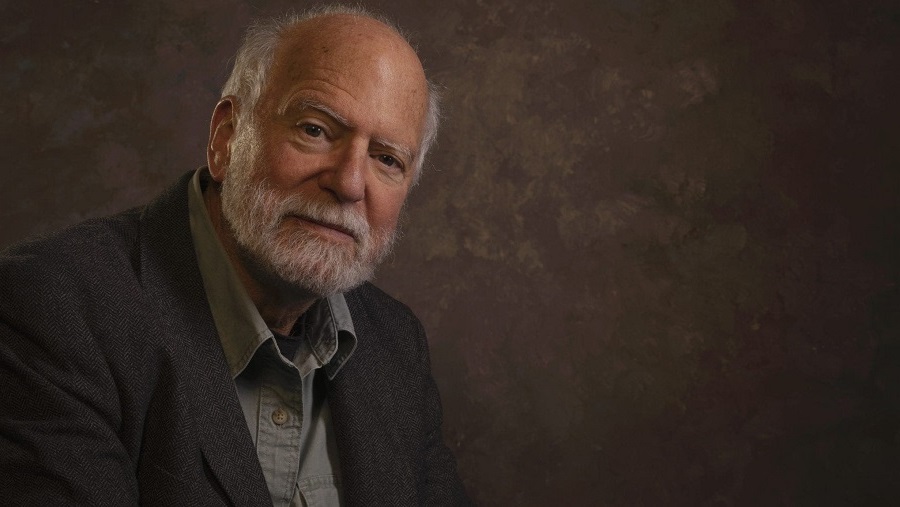 Mohsen Abdelmoumen: How do you, as an artist, see American society today?

Robert Shetterly: As an artist and as a citizen I see American society as desperate to avoid the real consequences of its racism, militarism, oligarchical distribution of wealth, and legal system written to enable the powerful to maintain wealth and power. There are several layers of propaganda — there’s the obvious propaganda & lies  of the Trumpists  about stolen elections, but there’s the less obvious propaganda of the politicians from both parties about « our democracy. » That latter language is used to convince and comfort the population that we have a working democracy. We don’t.

You are an artist and an activist. What is your analysis of recent events in the United States?

When large sections of the people are manipulated with lies, racism, fear, conspiracy theory,  and jingoism in order to have them participate in actions and policies which are really against their interests, the long-term problem is how to re-educate them. Every attempt at telling the truth, then, seems like furtherance of the conspiracy, a proof of it. The best solution is to require the liars to publicly admit what they have done & why. This is unlikely.

I think it’s important to understand what’s behind the insistence that the election was rigged & a fraud. This is really a white supremacist claim. And that’s why it has such resonance with Trump’s base. If we count only the white votes, Trump wins. Votes by black and brown people,  to their way of thinking, are illegitimate in a white country. The fraud was allowing people of color to determine the outcome of an election. That’s why we see the insurrectionists carrying Confederate flags.

How do you view the capture of the Capitol by Trump’s supporters?

I see the capture of the Capitol as a metaphor. It’s been captured for a long time by special interests, many of them more racist and violent in the way they play out for other people than the Trump army of thugs.

The lobbyists who come in Armani suits are actually far more violent with their weapons, their damage to the environment, their control of monetary policy than anything we saw on the TV last week. They are well-mannered and have Ivy League pedigrees, and they have no respect for « The People’s House. »

Is the United States really a democracy?

Yes and no. There is still local and grassroots democracy.

Large scale, national, policy is not democratic. In order for there to be a democracy, we would have to get all special interest money out of the political system, all profit out of militarism, and all corporate money out of the media. By doing that the people’s interests and the environment’s interests ( without protecting the environment we cannot have life or liberty or the pursuit of happiness) can be represented.

Don’t you think that the capitalist consumer society is fundamentally fascist and racist?

In the sense that the capitalist consumer society requires access to raw materials and cheap labor to maximize profit, yes, it is inevitably fascist and racist. It needs to exploit people and nature and needs to justify it.

Americans Who Tell the Truth. What does this project really mean to you?

This project means my self-respect. It means I want to be a member of a community which has defiantly stood up for the truth of the ideals of the country, not the practice. It is a community of truth-telling, dignity for all people, courage, and love.

Your world is fascinating. Don’t you think that art should be a means of resistance?

Art is a means of resistance. The creation of a real artwork is the creation of a fact.  It’s the art that inspires, that models courageous citizenship, which says our ethics and economy must derive from our morals and ideals, not from our desire for profit.

Yes, that is the intent. But power usually remains with those who control the media, control the narrative. To really confront deep lies, one needs major media.

You denounce capitalism, imperialist wars. Don’t you think it is imperative to find an alternative to capitalism and imperialism?

Of course.  capitalism and imperialism are destroying the planet and the future, they’re cannibalizing the future. Perhaps survival, not political ideology, will reveal the alternatives. But we know what those alternatives are anyway. Begin, simply, with the idea that all social organizations must be predicated on the  Common Good and be in harmony with nature.  Build from there.

The extermination of the Amerindians, the Vietnam War, the Iraq War, the coups d’état in Latin America, Etc. Why do you think the empire still needs wars?

Wars are necessary for several reasons: The control of resources, the control of labor, but – perhaps this is most important – the weapons makers and militarists control the government for the immense profits in war preparation and war-making. They often don’t need the war so much as they need the fear of war and the money stolen from the people and given to them in the name of security.

Is it a fatality to have media at the service of the big capitalists and the propaganda and lies of the oligarchy? Isn’t the main role of the media to inform and not to serve the powerful?

Yes, truth and democracy are impossible when corporations control the media.

We need the artist’s eye and vision to understand the world. How do you see the world today?

My artist’s eye sees complexity — but mostly grief. We are on the verge of squandering and killing a cosmic miracle  — the Earth.

And systems of economy and control have been built which engineer all of us into complicity with that squandering. On the one hand that makes me furiously angry, but on the other fills me with love for what’s left.

William Sloane Coffin said, « If you lessen your anger at the structures of power, you lower your love for the victims of power. »

Who is Robert Shetterly?

Robert Shetterly was born in 1946 in Cincinnati, Ohio. He graduated in 1969 from Harvard College with a degree in English Literature. At Harvard he took some courses in drawing which changed the direction of his creative life — from the written word to the image. Also, during this time, he was active in Civil Rights and in the Anti-Vietnam War movement.

After college and moving to Maine in 1970, he taught himself drawing, printmaking, and painting. While trying to become proficient in printmaking and painting, he illustrated widely. For twelve years he did the editorial page drawings for The Maine Times newspaper, illustrated National Audubon’s children’s newspaper Audubon Adventures, and approximately 30 books.

Robert´s paintings and prints are in collections all over the U.S. and Europe. A collection of his drawings & etchings, Speaking Fire at Stones, was published in 1993. He is well known for his series of 70 painted etchings based on William Blake’s “Proverbs of Hell”, and for another series of 50 painted etchings reflecting on the metaphor of the Annunciation.

His painting has tended toward the narrative and the surreal, however, for nearly twenty years he has been painting the series of portraits Americans Who Tell the Truth, now numbering over 250. The exhibit has been traveling around the country since 2003. Venues have included everything from university museums and grade school libraries to sandwich shops, the Cathedral of Saint John the Divine in New York City, and the Superior Court in San Francisco. To date, the exhibits have visited 31 states. In 2005, Dutton published a book of the portraits by the same name. In 2006, the book won the top award of the International Reading Association for Intermediate non-fiction.

The portraits have given Shetterly an opportunity to speak with children and adults all over this country about the necessity of dissent in a democracy, the obligations of citizenship, sustainability, US history, and how democracy cannot function if politicians don’t tell the truth, if the media don’t report it, and if the people don’t demand it.

Shetterly has engaged in a wide variety of political and humanitarian work with many of the people whose portraits he has painted. In the spring of 2007, he traveled to Rwanda with Lily Yeh and Terry Tempest Williams to work in a village of survivors of the 1994 genocide there. Much of his current work focuses on  climate change, and on the continuation of systemic racism in the US particularly in relation to the school-to-prison pipeline.

From  1990 to 2015 , he was  the President of the Union of Maine Visual Artists (UMVA), and a producer of the UMVA’s Maine Masters Project, an on-going series of video documentaries about Maine artists.

-In 2005, the Maine People’s Alliance awarded him its Rising Tide award.

-Also in 2005, he was named an Honorary Member of the Maine Chapter of Veterans for Peace.

-In May 2007, Rob received a Distinguished Achievement Award from the University of Southern Maine and gave the Commencement Address at the University of New England which awarded him an Honorary Doctorate in Humane Letters.

-In 2009,  he was named a Woodrow Wilson Visiting Fellow that enables him to do week long residences in colleges around the country.

-The University of Maine at Farmington awarded him an Honorary Doctorate of Humane Letters in 2011.